Project "The Bell of Peace and Unity"

The values of peaceful life

Sad events in the East of Ukraine and in Crimea reflexively encourage society to form special distinctive features of a free Ukrainian nation, uniting all the regions of the country with one idea.
The Green Stripe team is rich in enthusiasm to realize the idea of the master Bohdan Mazur - the construction of the memorial architectural composition Bell of Peace and Unity.

The realization of the project will bring to each Individual the call to Unity and recall the main values ​​of peaceful life that are easily destroyed by the war. The project will allow to unite military and civilians of Ukraine despite of religion, geographic location and general political views.

The transformation of cold steel - the fragments of the war in the East of Ukraine - into a memorable sign of a life-long struggle of Good and Evil, a reminder to future generations that there is nothing more important than PEACEFUL life. 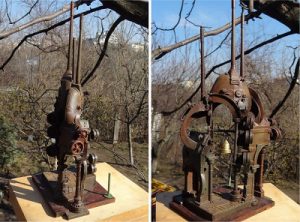 Solemn opening of the Bell of Peace and Unity, invitation of veterans and ATO fighters, all those who remains indifferent to events in Ukraine and supports this Project. Green Stripe will implement this project jointly with the Ministry of Defense of Ukraine, which will increase the combat spirit of the troops and the rating of the Armed Forces of Ukraine as a whole. The Minister of Defense of Ukraine, Army General Stepan Poltorak, in every possible way supports the idea declared by our organization - the construction of the Bell of Peace and Unity.

YOU CAN LEAVE COMMENTS, PROPOSALS AND REMARKS TO THE PROJECT

You can help us